If you've looked into ordering a Gen 8 or newer HPE server you may have come across the term FlexLOM or Flexible LOM.  If you weren't quite sure what that meant, today we're going to give you a brief explanation of what it means and how they work in servers.

The definition we are concerned with today though is HPE's LOM,  or LAN (Local Area Network) On Motherboard.  In many older systems, the Network Interface Card (NIC) was permanently attached to the motherboard.  This wasn't an issue for many years when the most common networking interface was Gigabit Ethernet.  However, faster networking technologies have emerged resulting in changing needs for today's data centers.  The old NICs, with their slower technology, are being pushed aside and left taking up valuable space in favor of adapters being used in expansion slots.

In order to more effectively use the space available, HPE has started making the built in NIC (or LOM) removable, allowing the user to choose between the common Gigabit Ethernet or newer technologies.  The image below shows the difference between standard LOM design and HPE's new FlexLom: 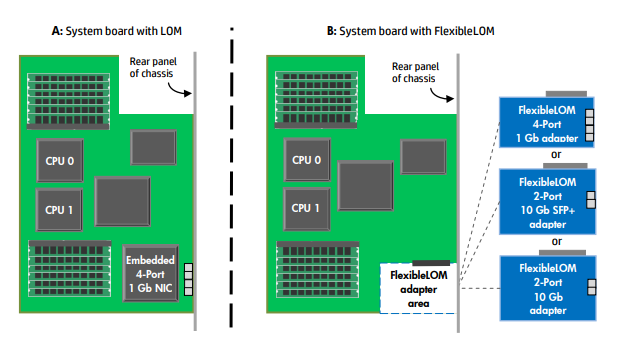 It should be noted that this is not a unique to HPE technology.  Dell and other OEMs offer their own removable and replaceable NIC modules but use their own names and model numbers.